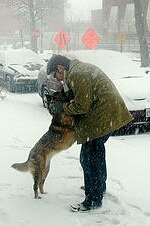 A new genetic analysis of man’s best friend could help scientists explain why a border collie has knack for herding or why poodles sport a curly coat. In the May 21 issue of Science, researchers at Fred Hutchinson Cancer Research Center report the first extensive genetic comparison of domestic dog breeds.

The study, led by Fred Hutchinson researchers Drs. Elaine Ostrander, Leonid Krugylak and graduate student Heidi Parker, revealed distinct DNA blueprints for each of the 85 varieties of purebreds that were analyzed as well as similarities between certain breeds. The researchers expect that understanding these genetic relationships will help them uncover the genes responsible for the physical features and behaviors unique to each breed as well as the diseases to which they are commonly susceptible, such as cancer, deafness, blindness, heart disease and hip dysplasia.

The findings also have generated excitement among those who study diseases of the human animal. Because at least half of the more than 300 inherited canine disorders-including a number of cancers-resemble specific diseases of man, many scientists believe that the dog genome holds a wealth of information that will benefit human health.

Ostrander, head of the dog genome project at Fred Hutchinson, was among the first to appreciate the dog’s potential as a model system for gene hunting.

“This study helps us understand the genetic relationships between breeds, a finding that will facilitate our efforts to map disease genes and genes for what are known as complex traits, which result from the interaction of multiple genes,” she said. “This analysis provides us with the blueprint.”

The dog is a geneticist’s dream because each pure breed represents a group of genetically similar animals that have descended from only a few ancestors.

“Most breeds have been artificially created by man,” said Parker. “Although all are members of the same species, this selective breeding has resulted in amazing variation between breeds with respect to weight, size, head shapes, coat, ear shape, behaviors and diseases.”

The level of diversity within the species is unprecedented, Kruglyak said. “Obviously, we’d like to understand the genetic differences that are responsible for this.”

Since any traits associated with a given breed must result from a shared set of genetic determinants, these genes stand out much more obviously than they would in a population of unrelated, or genetically dissimilar, animals. In addition, because most breeds were developed within the last 300 years-considered a very short period of time by evolutionary biologists-scientists expect that each distinctive trait has arisen from a small number of genes. Both of these features greatly ease scientists’ ability to identify a gene or genes responsible for a specific trait.

To identify the genes for a particular characteristic or disease man, scientists often focus on human groups known to share a common ancestry. Examples include large, multigenerational families or isolated populations, such as Icelanders, whose members descend from a small group of founders. The small number of isolated human populations available for study has hampered the identification of genes for many common diseases, a problem that Ostrander and others believe could be overcome by studying the dog.

“There are more than 400 breeds of dog, and each is an isolated breeding population,” Ostrander said. “What that means is that each dog breed is a like a little Iceland-an isolated population that allows us to simplify a complicated genetic problem.

“Although there may be just as many genes for a given disease in dogs as there are in humans, being able to search for them in a single breed allows us to find the one or two genes responsible for that disease in that population much more easily.”

To analyze the similarities and differences among purebred dogs, Parker contacted breed clubs and traveled to dog shows to collect DNA samples from five animals from each of 85 different breeds. She then analyzed, or genotyped, the DNA using a procedure known as microsatellite analysis.

Microsatellites serve as genetic signposts, snippets of DNA whose physical positions along the chromosome are known. The DNA sequence of each microsatellite marker can vary considerably among individuals but is often shared among those who are closely related.

Parker examined 96 different microsatellites in 414 purebred dogs representing 85 breeds. She then worked with Kruglyak, an expert in the application of state-of-the-art statistical methods to large genetic studies, to evaluate the relationships among breeds.

The researchers found that the DNA sequences of microsatellites from dogs within a breed were much more similar than those among breeds. Microsatellite “signatures” for each breed were distinct enough that they could be used to categorize 99 percent of the individual dogs into their correct breeds.

“The fact that we were able to do this with so few dogs from each breed tells us that the microsatellites-and therefore, probably many of their genes-are very common among members of a breed,” Parker said. That finding also means that the approach could be used to verify that a dog truly belongs to a particular breed if its ancestry is in question.

Based on the genotyping analysis, the researchers were able to sort the breeds into four groups of genetically similar varieties, which presumably share common ancestry. Some of the relationships between breeds had not previously been known.

One of the four clusters represents an ancient group of animals with Asian and African origins that possess a wide diversity of traits. This group includes breeds such as the Alaskan Malamute and Siberian Husky and shows the closest relationship to the wolf, the direct ancestor of the domestic dog.

“This group may be telling us something about the original domesticated dog population,” Kruglyak said.

One of the other three other groups contains Mastiff-like breeds that share common physical characteristics. Another includes Shetland and Belgian sheepdogs, Collies and other dogs with herding behaviors. The fourth group includes animals with hunting-associated behaviors. Parker said that research groups, including Ostrander’s lab, are using information from their analysis to study specific canine diseases.

“We’re now looking at narrowing down similar regions of DNA to identify single genes that contribute to particular traits,” she said. “There are hundreds of diseases out there, and many of them have counterparts in humans.”

In addition to cancer, the Ostrander lab is studying genetics of blindness and soon will begin a study on genetics of obsessive-compulsive disease. “What is so great about this study to date is that it’s been a real community effort,” Ostrander said. “We could not have done the work without the involvement of pet owners, breeders and community leaders who support the work we’re doing to improve both canine and human health. This is just the way science is supposed to be done.”

The Fred Hutchinson Cancer Research Center, home of two Nobel Prize laureates, is an independent, nonprofit research institution dedicated to the development and advancement of biomedical research to eliminate cancer and other potentially fatal diseases. Fred Hutchinson receives more funding from the National Institutes of Health than any other independent U.S. research center. Recognized internationally for its pioneering work in bone-marrow transplantation, the center’s four scientific divisions collaborate to form a unique environment for conducting basic and applied science. Fred Hutchinson, in collaboration with its clinical and research partners, the University of Washington and Children’s Hospital and Regional Medical Center, is the only National Cancer Institute-designated comprehensive cancer center in the Pacific Northwest and is one of 38 nationwide. For more information, visit the center’s Web site at http://www.fhcrc.org/.