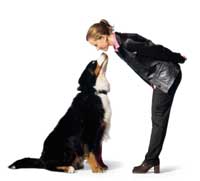 Dogs can be trained to detect bladder cancer by ‘smelling’ urine, concludes new research published in this week’s BMJ.

Tumours are thought to produce volatile organic compounds with distinctive odours. Even when present in minute quantities, it is possible that they are detectable by dogs, with their exceptional sense of smell.

The study involved urine samples from 36 patients with bladder cancer and 108 control samples from diseased (non-cancerous) and healthy individuals; 63 of the samples were used exclusively in final testing of the dogs.

Six dogs of varying breeds and ages were trained over 7 months to discriminate between urine from patients with bladder cancer and that from control individuals.

For the final tests, each dog was offered a set of seven urine samples, comprising one bladder cancer sample and six sex-matched controls. Some controls were also age-matched and most had some form of non-malignant urological disorder. The dogs identified their chosen sample by lying next to it. Each dog performed a total of 9 separate tests.

Taken together as a group, the dogs correctly selected bladder cancer urine on 22 out of 54 occasions, an average success rate of 41% compared to 14% expected by chance alone. The dogs’ capacity to recognise a characteristic bladder cancer odour was independent of other chemical aspects of the urine, such as the presence of blood.

“Our study provides the first piece of experimental evidence to show that dogs can detect cancer by olfactory means more successfully than would be expected by chance alone,” say the authors.

“The results we achieved should provide a benchmark against which future studies can be compared, and it is to be hoped that our approach to training may assist others engaged in similar work.”

“The study was carefully designed to include several features to minimise bias, and it is hard to fault the study in this respect,” writes an expert in medical statistics in an accompanying commentary. “On balance the results are unambiguous. Dogs can be trained to recognise and flag an unusual smell in the urine of bladder cancer patients.”