Home » The Curse of Mediocrity

The Curse of Mediocrity 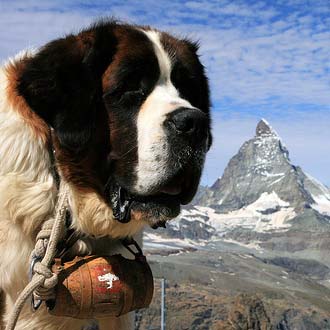 I would speak here of mediocrity. I want to answer some question on this subject; what is mediocrity, and why is mediocrity such a bad thing? Follow along here and we will examine the subject.

Some time ago I was involved in a rather serious debate in which my learned opponent offered the position that moderation, which is a thing that I strongly favor in Saint Bernards, was the same thing as mediocrity. This is a position with which I strongly disagree! I profess that moderation is good and mediocrity is bad. As many people have been exposed to my feelings on the subject of moderation, I am using this occasion to dispel some of the confusion on this other subject.

I would like to insure, before I begin, that we all can make the distinction between mediocrity and moderation. Let us start by agreeing upon the definition of mediocrity. I am sure that when I speak of mediocrity that most who read these words will have a mental image of something other than my topic here. Therefore, I must define what I mean by mediocrity.

By mediocrity I mean having features or aspects that are neither wrong nor are they quite correct; perhaps we could say that a mediocre dog is one that is almost correct. For instance; a mediocre dog may have head features that almost make a correct head — features such as furrows of adequate depth and width. The mediocre dog might have well-pronounced supraorbital ridges or it might have almost well developed cheekbones. Maybe the dog is almost proportionately tall; not really long, but clearly rectangular. Perhaps the dog is not a big sack of mush, but it is by no means an athlete. This almost correct dog is mediocre. This then is my definition of a mediocre dog; not having outstanding faults but lacking virtues?

“So what!” you might exclaim. My response is that mediocre dogs represent a big problem to the fancy. Why? Because, the curse of any breed of dogs is the abundance of fault-free mediocre specimens that are used to perpetuate the line. I am remembering some sage advice I was given over thirty years ago. I was told that the biggest mistake that most breeders make was to select matings in order to eliminate faults when they should be concentrating on acquiring virtues instead. I was told to always remember that the greatest fault any dog can have is a lack of virtues.

If mediocrity is bad, there should be some reason that makes it so. I think I can provide such a reason. The primary reason is that the mediocre dogs in any breed are a drag on the progress potentially available to the breed.

The job of the breeder is to seek out virtues for his stock and strive to incorporate them in his individual animals.

As breeders, as judges and as fanciers of the breed we are constantly called upon to evaluate the worthiness of the animals that come before us. We do this by looking at the individual features of the whole animal and mentally grading each attribute as a fault or a virtue. We look at the ear set, the skull width, the substance and massiveness, the soundness, the coat, the feet, the temperament. We look at all aspects of the individual dog and try to catalog each aspect as either correct (hence, a virtue) or incorrect (hence, a fault). The hard part of this evaluation process is grading those features that are neither quite correct nor quite incorrect; the mediocre part of the dog. When looking at a dog’s faults and virtues we often find the picture muddled by mediocre aspects, and every dog has a certain measure of mediocre aspects. This is only important when the mediocre aspects are so numerous that they outweigh the virtues.

Mediocrity is the problem that is most often overlooked by those who would like to accomplish something with their breeding program. I offer the philosophy that if your stock is marked by the curse of mediocrity you will find yourself operating under a severe handicap.

So, what does this have to do with judging mediocre dogs? First of all, whenever we, as judges, help make champions out of dogs that lack virtues we are doing a great disservice to the breed and fancy. I don’t believe that anybody has any problem agreeing with that, but the problem comes when we have an entry of nothing else in the ring other than mediocre dogs. I have known some judges with enough courage to withhold points even when there was a major at stake. Such a judge is rare! Why? Because such action on the part of the judge is certain to generate much conversation — with the Field Rep, with the exhibitors, and/or from letters to and from the AKC — and the fear of these consequences is what requires the courage on the part of those who would withhold. This includes me; for withholding awards on a wholesale basis requires you to be very sure of yourself and very certain of your position. Whenever you are in the ring facing a breed of which you don’t have a very in-depth knowledge, it is harder to say that there is no merit in this ring! We all want to do the right thing every time we step into the ring, but feeling a little uncertain is the bug-a-boo that makes so many of us do the safe thing rather than the right thing!

One other thought. The term, “Lack of Merit” has long been an acceptable notation in the judge’s book, but I think it is not used as often as it ought.

I would leave you with this message, “It matters not whether we service the fancy as breeders or as judges, we should universally decry the mediocre dog.” The primary reason is that the mediocre dogs in any breed are a drag on the progress potentially available to the breed. And that’s all I have to say on the subject.